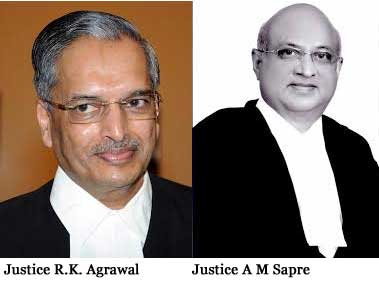 A Supreme Court bench of Justice R. K. Agrawal and Justice Abhay Manohar Sapre pronounced Judgment in appeal filed against the Judgment dated 21.11.2017 passed by the High Court of Punjab and Haryana. The Single Judge of the High Court had granted interim bail to 3 the top management executives of Ryan International School till the presentation of challan subject to certain conditions.

Brief facts of the case is that on 08.09.2017, the appellant herein dropped his son Pradyumn Thakur, aged 7 years, and his daughter, Vidhi Thakur to their School, viz., Ryan International School, Bhondsi at 8:00 a.m. At 08:10 a.m., the appellant received a phone call of his wife who asked him to immediately call Ms. Anju Dudeja of the said School. When the appellant contacted Ms. Anju Dudeja, she told him that his son had a cut on his neck and is profusely bleeding. She asked him to reach Badshahpur Hospital where he was being taken. The appellant, along with his wife, left for Badshahpur Hospital but on the way he received a call from Ms. Anju Dudeja that they were taking the child to Artemis Hospital. On reaching there, the appellant found that there was a cut on the right side of his son's neck up to the ear and his son was in Emergency Ward. The Doctor informed the appellant that his son Pradyumn had died.

On receipt of the information, the police recorded a First Information Report (FIR) being No. 250 of 2017 dated 08.09.2017 at Police Station Bhondsi, Gurugram and arrested one Ashok Kumar, son of Amichand, on the same day. The State Government (Haryana), issued a Notification dated 17.09.2017, requesting the Central Bureau of Investigation (CBI) to take up the investigation. The Ministry of Personnel, Public Grievances and Pension (Department of Personnel and Training) Government of India, New Delhi, vide Notification dated 22.09.2017, transferred the investigation of the case to the CBI which re-registered the FIR already registered by the police authorities as case bearing No. RC8(S)/2017/SC-III/New Delhi on 22.09.2017 itself which is a reproduction of the FIR recorded by the police authorities at Police Station Bhondsi, Gurugram.


The private respondents, viz., Mr. Ryan Pinto, Dr. Augustine Francis Pinto and Mrs. Grace Pinto approached the Bombay High Court by filing Anticipatory Bail Application. The single Judge of the High Court of Judicature at Bombay on 12.09.2017 granted interim stay from arrest of these persons and the matter was posted for 13.09.2017. On coming to know about the filing of the above anticipatory bail applications, the appellant herein approached the High Court of Bombay by filing the intervention application opposing the transit bail. Learned single Judge of the High Court, vide order dated 14.09.2017, rejected the anticipatory bail applications being Nos. 1599 and 1608 of 2017. However, the interim relief granted by the High Court vide order dated 12.09.2017 was extended till 5:00 p.m. of 15.09.2017 subject to certain conditions.

The private respondents approached the Punjab & Haryana High Court on for grant of interim bail. However, the said petition was accepted by the Registry of the High Court on 17.09.2017 and the copy of the said petition was supplied to the office of learned Advocate General for the State of Haryana on 18.09.2017. It appears that in the meantime, Dr. Augustine Francis Pinto approached this Court by filing a writ petition (criminal) being No. 139 of 2017 seeking transfer of case from the Punjab & Haryana High Court to Delhi which was taken up on 18.09.2017 and this Court disposed of the writ petition while deprecating the practice of the Bar Associations to pass a Resolution of this nature and also recorded the fact that the Bar Associations have withdrawn the Resolution.

The Punjab & Haryana High Court had passed order on 28.09.2017 staying the arrest of the private respondents till 07.10.2017 when the matter was directed to be listed. The appellant approached Supreme Court by filing a petition for Special Leave to Appeal which was taken up on 13.10.2017 by the Supreme Court when counsel for the appellant informed this Court that the appeal had become in fructuous.

The Single Judge of the High Court, vide judgment and order dated 07.10.2017 considered the submissions made by the respective parties including that of the appellant and while fixing the cases for 05.12.2017 granted interim bail to the private respondents with certain directions.

The court opined that "In our considered opinion, the private respondents cannot be held guilty of any suppression, concealment or fraud in this matter for the simple reason that the petitions were prepared on 15.09.2017 and accepted by the Registry of the Punjab & Haryana High Court on 17.09.2017. The fact relating to the withdrawal of the Resolution passed by the District Bar Associations, Gurugram and Sohna cannot be said to be in the knowledge of the private respondents. Moreover, this plea had been dealt with by learned single Judge in the order dated 07.10.2017 and had been negated."


"Further, we cannot lose sight of the fact that this incident had received wide coverage in the media, both electronic and print. In fact, it can be said that there was a trial by media, therefore, when the private respondents have directly approached the High Court for grant of anticipatory/interim bail under Section 438 of the Code, that too when the High Court has concurrent jurisdiction, we cannot find any fault with the action of the private respondents."


The court further opined that:
"without expressing anything on the merits of the case as the investigation is still under progress and the CBI is yet to come to a conclusion regarding the involvement of the private respondents in the crime, the private respondents herein have made out a case for grant of protection by way of interim bail till the presentation of Challan by the CBI as has been passed by learned single Judge. Therefore, the order passed by learned single Judge granting interim bail to the answering respondents till the presentation of Challan cannot be faulted with."


The court dismissed the appeal with the above observations.

What a Mess! This is perhaps the only way to describe the events that have transpired in the examination conducted by the U.P. SESSB - Supreme Court December 11, 2017